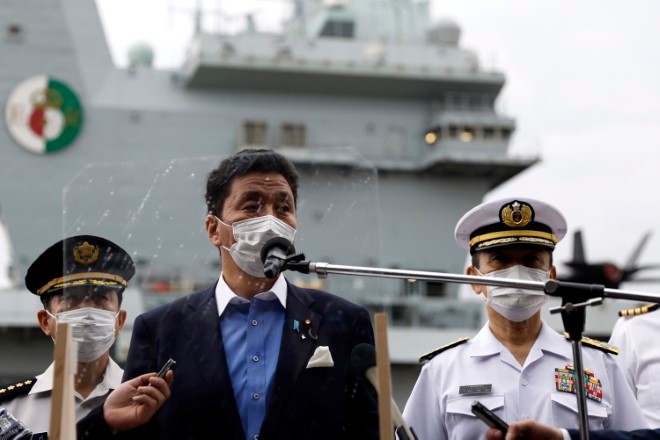 The commander of the British aircraft carrier HMS Queen Elizabeth said on Tuesday that his strike group’s first stopover in Japan underscores Britain’s goal of increasing its presence in the Indo-Pacific region and its commitment to strengthen further its partnership with Japan.

The visit comes as Japan seeks to expand its military cooperation beyond its traditional alliance with the United States as the Chinese navy expands and puts more pressure on its territorial claims.

The Queen Elizabeth participated in a joint exercise with warships from the United States, the Netherlands, Canada and Japan before arriving in Yokosuka on Saturday. The exercise was part of efforts to achieve a “free and open Indo-Pacific” vision led by Washington and Tokyo.

The strike group’s visit “embodies (Britain’s) tilt towards the Indo-Pacific, marks a return to the UK’s enduring presence in the region,” said its commander, Commodore Steve Moorhouse , at an online press conference. This demonstrates “the UK’s commitment to invest in our partnership with Japan,” he said.

Moorhouse said they were being “escorted and followed by Chinese units, which is as planned” during the joint exercise, but the meeting with the Chinese navy was “safe and professional”.

British Ambassador to Japan Julia Longbottom said the Indo-Pacific tilt is not just about security.

Japan is increasingly concerned about China’s growing military influence in the region as well as Beijing’s escalating tensions with Taiwan and rivalry with the United States. Japan has repeatedly protested to China over its increased activity near the Japanese-controlled Senkaku Islands, which are also claimed by China, which calls them Diaoyu.

Japanese Defense Minister Nobuo Kishi, who traveled to Yokosuka on Monday and met with Moorhouse aboard the Queen Elizabeth, said Britain and other European countries’ attention to “unilateral” attempts “To change the status quo in the East and South China Seas contributes to peace and stability in the region.

The strike group left Britain in May. Commissioned in 2017, HMS Queen Elizabeth is Britain’s largest and most powerful warship. It is capable of carrying up to 40 aircraft such as F-35 stealth fighters, according to the Royal Navy.