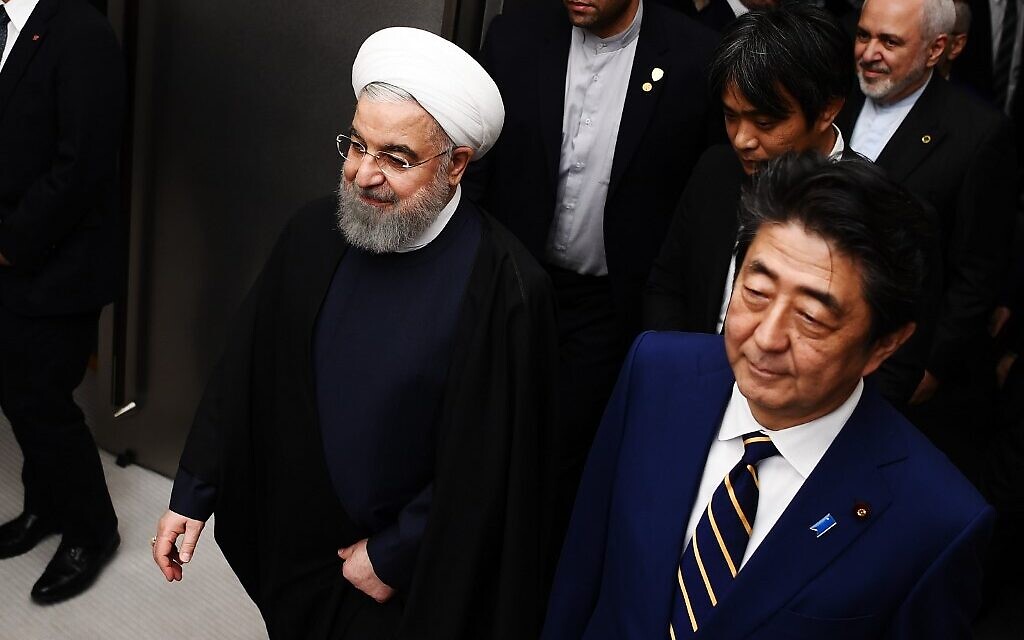 TOKYO – Iranian President Hassan Rouhani concluded his two-day visit to Japan on Saturday as Tehran, under pressure from US sanctions, sought economic support from Tokyo.

Rouhani’s trip to Japan, the first by an Iranian head of state in two decades, came after deadly protests against rising fuel prices in his country, where the economy was hit by US sanctions on Tehran’s nuclear program.

The Iranian leader on Saturday held a closed-door meeting at a Tokyo hotel with Japanese business leaders, during which he criticized the sanctions and expressed hope for strengthening long-standing ties with Japan, public broadcaster NHK said, citing Iran’s foreign ministry.

US sanctions were reimposed last year after US President Donald Trump pulled the US out of the multinational Iran nuclear deal.

By registering, you accept the conditions

Rouhani, at a summit with Prime Minister Shinzo Abe on Friday, called on Japan and other countries to help Iran’s economy.

“We welcome any plan that could increase trade, especially in the area of ​​energy and increase oil exports and sales,” he told Abe, according to the agency. Iranian official press IRNA.

Prior to this summit, Rouhani condemned Washington for its “unilateral and irrational” withdrawal from the nuclear deal, saying: “I hope that Japan and other countries will make efforts to maintain this agreement.”

As a key US ally that also maintains close diplomatic and economic ties with Iran, Abe has attempted to build bridges between the two rivals.

“The two leaders have agreed to keep their communications close,” said a Japanese government official.

Abe visited Tehran in June to try to ease tensions between the United States and Iran in the Gulf.

Japan was once a major buyer of Iranian crude, but has halted its purchases to comply with US sanctions.

Iranian government spokesman Ali Rabiei downplayed the mediation aspect of Rouhani’s trip, saying the visit to Tokyo had “nothing to do with issues such as negotiations with America.”

However, he acknowledged that “our Japanese friends usually convey messages or initiatives, which we welcome … and seriously consider.” 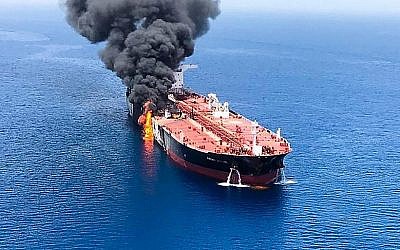 A photo obtained by AFP from Iranian news agency ISNA on June 13, 2019, shows fire and smoke rising from an oil tanker allegedly attacked in the waters of the Gulf of Oman, near the Strait of Ormuz. (ISNA / AFP)

During his meeting with Rouhani, Abe said that “Japan will patiently continue its diplomatic efforts to ease tensions in the Middle East,” according to a Japanese government official.

Abe told Rouhani Tokyo the intention to send Japanese warships to the Gulf of Oman to protect shipping there, while calling on Tehran to take “responsibility” for securing sea lanes in the region.

“This type of policy is aimed at ensuring the safety of Japanese ships,” government spokesman Yoshihide Suga said earlier today, adding that 90 percent of Japan’s crude oil imports come from the region.

Rouhani flew to Japan from Malaysia, where he called on Muslim countries at a summit to unite to fight American “economic terrorism”.

Osamu Miyata, director of the Center for Contemporary Islamic Studies in Japan (CCISJ), told AFP that Abe would find it difficult to navigate his way between Trump and Rouhani. 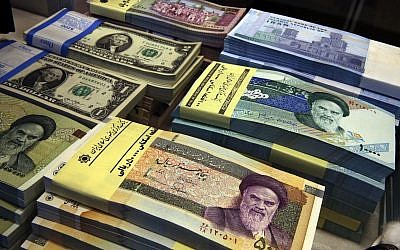 Iranian and US banknotes are on display at an exchange office in downtown Tehran, Iran, April 4, 2015 (Vahid Salemi / AP)

US sanctions “have a serious impact on all aspects of Iran – the daily lives of the people, the country’s finances and the inflation of imported goods,” said Hitoshi Suzuki, Middle East researcher at the Institute of Developing Economies (IDE-JETRO). AFP.

“It would be difficult to get any tangible results from the Rouhani-Abe meeting this time around, but in the long run, Japan can warn the United States that the current sanctions are having a serious negative impact,” Suzuki added.

“This could prompt Iranian domestic politics to evolve in the opposite direction to that hoped for by the United States – for example, hawks leading Iran to resume nuclear development, or the emergence of an anti-democratic Iran.” , did he declare.

Learn Hebrew in a fun and unique way

You get news from Israel … but do you TO HAVE this? Here is your chance to understand not only the big picture that we cover on these pages, but also the critical and juicy details of life in Israel.

In Streetwise Hebrew for the Times of Israel community, each month, we will learn several familiar Hebrew phrases around a common theme. These are small audio Hebrew lessons that we think you will really enjoy.

Are you serious. We appreciate this!

We are really glad you read X Times of Israel Articles in the past month.

That’s why we come to work every day – to provide discerning readers like you with must-see coverage of Israel and the Jewish world.

So now we have a request. Unlike other media, we have not set up a paywall. But since the journalism we do is expensive, we invite readers for whom The Times of Israel has become important to help support our work by joining The Times of Israel community.

For as little as $ 6 per month, you can help support our quality journalism while benefiting from The Times of Israel WITHOUT ADVERTISING, as well as access to exclusive content reserved for members of the Times of Israel community.