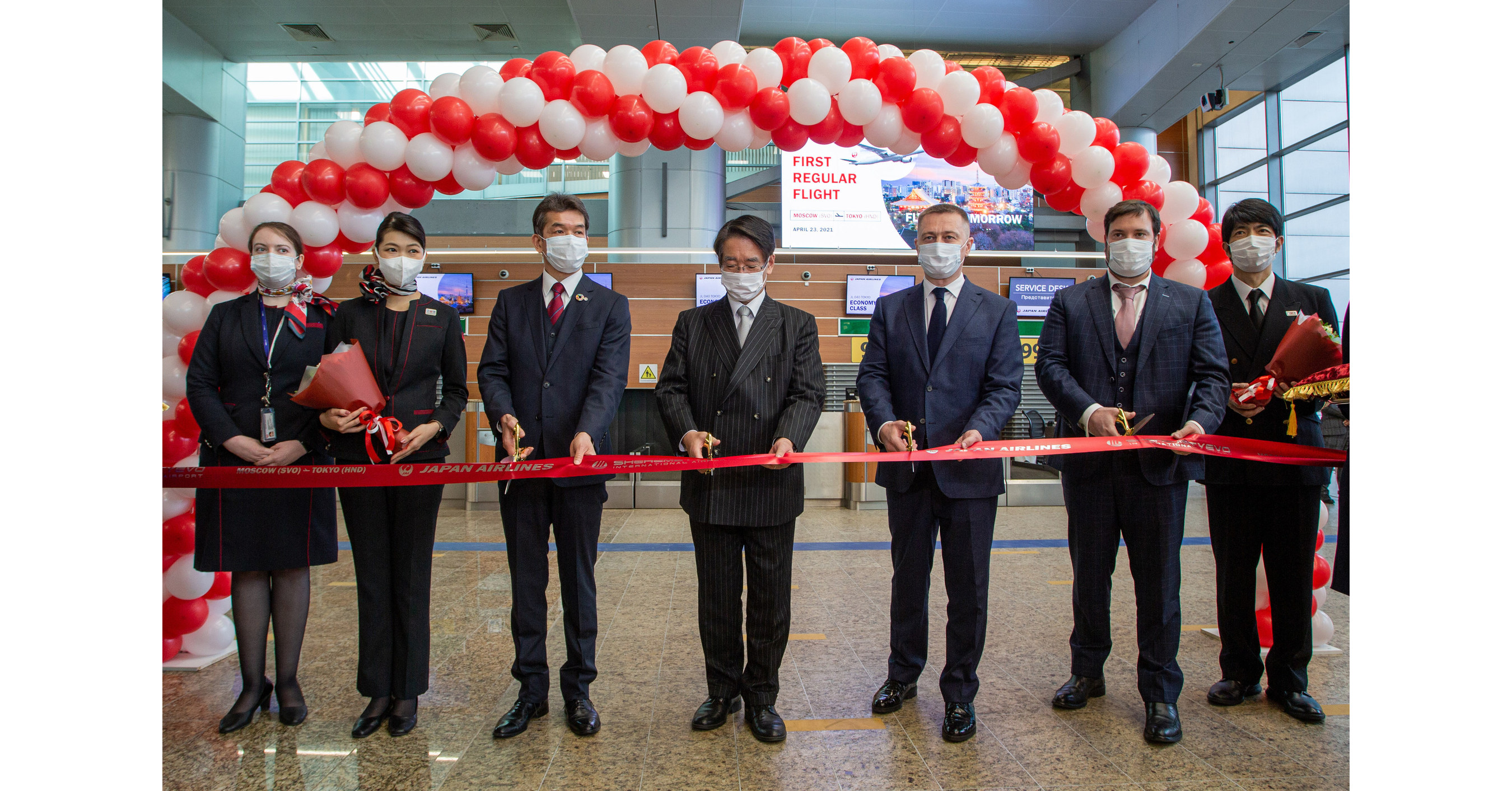 An official event was organized in Sheremetyevo to commemorate this important event with the participation of Ambassador Extraordinary and Plenipotentiary of Japan in Russia Mr. Toyohisa Kozuki, vice president and regional director of Japan Airlines for Russia and the CIS M. Takeshi Kodama, first deputy general manager for production of JSC SIA AO Nikulin, and deputy general manager for commercial activities of JSC SIA FM Sytin.

“We are proud that the first Japanese national carrier, recipient of five stars from Skytrax, has chosen Sheremetyevo to continue the development of air traffic between Japan and RussiaMr. Nikulin said at the ceremony. “Sheremetyevo is a recognized leader in Europe in service quality and the most powerful international hub in Russia in terms of terminal infrastructure and capacity of the aerodrome complex. I am confident that JAL passengers will be able to take advantage of the Sheremetyevo Airport route network for subsequent flights through Russia and Europe. ”

Ambassador Kozuki offered his congratulations “on JAL’s first flight from Sheremetyevo airport to Haneda airport. In recent years,” he said, “following a major reconstruction. Scale, Sheremetyevo Airport has become the main air gateway to the Russian capital. This transition to Sheremetyevo will facilitate the transfer of passengers from JAL to Aeroflot domestic flights. I hope the airport change will bring a large number of Japanese citizens to visit not only Moscow and Saint PETERSBOURG, but also Russian regions rich in history and culture. “

Mr. Kodama said: “Today we are happy to open a new page in the history of air traffic between Moscow and Tokyo by relaunching the connection between Sheremetyevo and Haneda airports. We are deeply grateful to our passengers, aviation authorities and Sheremetyevo Airport for their unlimited support during the difficult time of the coronavirus restrictions. We are committed to continuing to provide our customers with a level of service that exceeds their expectations, with the help of a 5-star Skytrax rating and a state-of-the-art Boeing 787 Dreamliner, and to help strengthen relationships. Between Russia and Japan. ”

The opening of direct flights from Tokyo will allow passengers to make convenient and comfortable connections not only in Russia and Europe, but also to a number of destinations in Japan, Asia and Oceania, as well as in the United States and Canada, thanks to the extensive network of Japan Airlines lines. Additionally, due to the convenient location of both airports, travelers have quick and comfortable access to downtown capitals, which is especially important for business passengers on this popular business route.

The flagship carrier offers its passengers the option of including up to two flights in Japan to their itinerary without an increase in airfare when purchasing a Moscow–Tokyo ticket. More active travelers can also purchase additional domestic flights from the JAL website at special rates offered exclusively to tourists, allowing passengers to visit the most remote and interesting corners of the Land of the Sun. Levant.

JAL will operate a modern Boeing 787 Dreamliner on the road. Onboard services will include wi-fi, integrated multimedia entertainment system, beverage service and two hot meals per day. Passengers with children can order baby food on board, and special infant seats and diapers can be requested in advance at no additional cost.

JAL passengers will appreciate the wide range and high quality of services at Terminal D at Sheremetyevo Airport, where the airline will be served. For business travelers there is a comfortable Moscow business lounge, which received the prestigious Business Traveler Russia and CIS awards in the field of business tourism, as well as a comfortable VIP lounge with a separate entrance. Many exclusive services are offered to VIP lounge clients: transfer and support to the plane, check-in and drop-off of separate luggage, assistance with pre-flight formalities and other services.

Photo report from the SVO press service on the event.

Sheremetyevo Airport is part of the TOP-5 of the airport hubs of Europe, the largest Russian airport in terms of passenger and freight traffic. In 2020, the airport served 19 million 784 thousand passengers.

Sheremetyevo is the best airport in terms of service quality in Europe, the absolute world leader in flight punctuality, the recipient of the highest 5-star Skytrax rating.

You can find additional information on http://www.svo.aero.

Japan Airlines is the oldest international airline in Japan, founded in 1951. A member of the Oneworld® Alliance, it serves 411 airports in more than 60 countries and regions with its codeshare partners. Japan Airlines offers its customers a high level of safety and services at all stages of the journey, which is confirmed by the company’s 5-star rating by the international agency Skytrax.

Japan Airlines operated flights between Russia and Japan continuously for over half a century. The first one “Moscow – Tokyo“the flight was operated from Sheremetyevo airport on April 17, 1967 and became the first flight in the history of civil aviation on the Trans-Siberian route.

Departure April 23, 2021, Japan Airlines will begin operating flights between Moscow and Tokyo to Sheremetyevo and Haneda airports. Each of the airports has a significant advantage for travelers: quick access to the city center of each capital and extensive domestic flight networks provide many convenient connections with domestic flights within Russia and Japan.

The launch of the air carrier’s direct flights was marked by the inauguration at Terminal D of the photographic exhibition “Sheremetyevo and Japan Airlines: half a century of history” devoted to the history of the partnership between Sheremetyevo airport and from Japan leading air carrier, as well as the diversity of culture and the rich tourist potential offered by the Land of the Rising Sun.