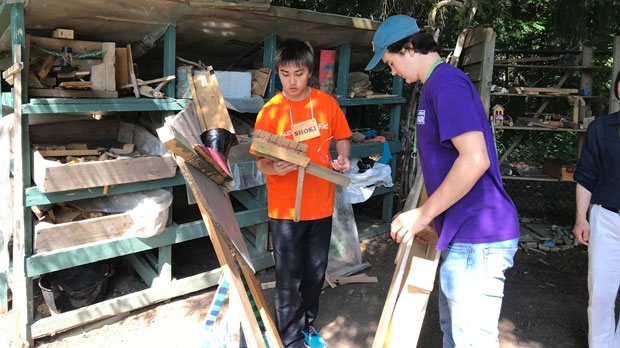 Nine teenagers from a region of Japan devastated by a tsunami in 2011 visited a camp at a children’s rehabilitation hospital in Toronto on Tuesday.

The students, ages 13 to 17, joined camper from Holland Bloorview Children’s Rehabilitation Hospital to do crafts at Spiral Garden, a day camp for children with and without physical and cognitive disabilities.

The visit was sponsored by a non-profit organization in Japan called Support Our Kids, which helps children traumatized by the 2011 earthquake and tsunami in the country.

Karl was only eight years old at the time. He spoke in hesitant English of his memories.

“My house is high, so my house (is not) damaged by the tsunami, but my house was damaged by the earthquake,” says Karl, who is now 16 years old. “I (entered) the house. My important belongings were broken, and the electricity and water were cut off.

He says he hopes Canadian children know how lucky they are to live in an area that is relatively earthquake-proof.

Holland Bloorview CEO Julia Hanigsberg said that despite the language barrier, the children understood each other very well.

“A lot of the kids in Holland Bloorview don’t communicate in a traditional way. They may not be able to speak to communicate, but they can communicate with each other and interact by creating an artistic piece, or making music and that’s what it was really about this morning.

Toronto philanthropists James and Chako Matsumoto have been organizing trips to Canada for Japanese teens in the Tohoku area for several years. Next year will be the last year the program will operate, as Support Our Kids was a 10 year commitment.

James and Chako Matsumoto hope that the children who participated in the program, who once desperately needed help, can now reach out and help others.

Chako Matsumoto says she has seen the emotional development of many children.

“They think about exploring their life and their growth. They are coming back this year and they are the assistants this year ”

Charron will bring a colorful flag, decorated by all the kids in Spiral Garden, Japan with Canada’s National Rugby Team for the 2019 Rugby World Cup this fall.