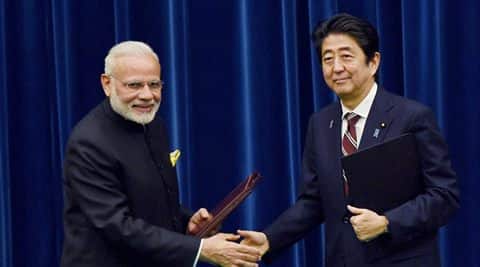 Before his departure, Modi addressed a lunch gathering of business leaders in Kobe, a city in Osaka Bay. He also traveled on the famous Japanese high-speed train Shinkansen, which is introduced in India on the Mumbai-Ahmedabad section, with his Japanese counterpart Shinzo Abe.

During the visit, India and Japan signed 10 pacts covering a range of areas such as boosting Japanese investment in infrastructure, railways and cooperation in space and agriculture, in the framework of agreements aimed at strengthening bilateral relations.

Lifting its reservations, Japan made an exception on Friday to sign a historic civilian nuclear deal with India, opening the door to exporting its atomic technology and reactors, after adding features such as safety and safety bearing in mind his sensitivities on the issue.

The nuclear deal, described as historic by Prime Minister Modi, was one of ten agreements signed between the two countries. Modi and Abe had wide-ranging talks which covered aspects such as trade and investment, security, terrorism, cooperation in skills development, aerospace and people-to-people contacts.