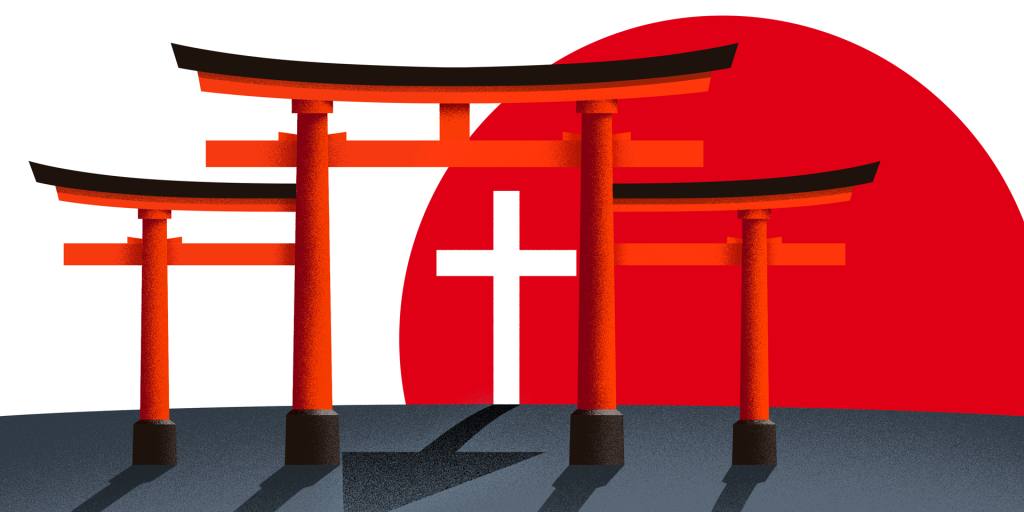 TOKYO – With the careful hands of a surgeon, Guillain Mwenge carefully pulls a blue and white card out of his backpack. The thin leaflet granting him a seat in the Tokyo Dome may well be the most precious possession of the doctor-turned-refugee, who found refuge in Japan after escaping political persecution in Congo a year and a half ago.

Although he had to leave his country and family due to his activities with a group of young protesters, seeing the leader of the faith he was raised in made Mwenge’s trip to Japan meaningful. He was one of five refugees and around 55,000 Catholics who received coveted tickets to a mass celebrated by Pope Francis in the famous baseball stadium.

Japanese Catholics make up only 1% of Japan’s population, but over the past decades the country has become home to a diverse diaspora of Catholics and other Christian denominations. The churches in Tokyo are full of believers from the neighboring Philippines and the West. There are also immigrants and refugees who have found it safer to practice Christianity in Japan than in their home countries of China, Southeast Asia, Africa and the Middle East.

“For me, I grew up in a Catholic family, so I’m just so happy to be there,” Mwenge said of the mass.

For his fourth trip to Asia since becoming head of the Catholic Church six years ago, Francis has chosen to visit two non-Christian countries: Thailand, predominantly Buddhist, and Japan, where people tend to adopt the customs of several different religions without adhering to any particular. The last papal visit to Japan was in 1981, when Pope John Paul II visited Hiroshima and Nagasaki, the center of the Japanese Christian community, to meet atomic bomb survivors.

Pope Francis celebrates mass on November 24 in Nagasaki, where he spoke out against nuclear weapons. (Photo by Shinya Sawai)

Like his predecessor, Francis delivered a message against nuclear weapons, as well as other threats to human life such as climate change and natural disasters, economic inequality and war.

“Here, in this city which has witnessed the catastrophic humanitarian and environmental consequences of a nuclear attack, our attempts to denounce the arms race will never be enough,” the pope said in Nagasaki on Sunday.

The Japanese bishops and the government of Prime Minister Shinzo Abe have been asking Francis for a visit for years. The invitation was finally accepted this year, offering the pontiff the opportunity to meet the newly inducted Emperor Naruhito in Japan.

“Japan has been on the church’s mind since the 1600s. It has never been a fully recognized project,” said Frank Ngo, a researcher at Sophia University, a Tokyo institution founded and managed by the Society of the Jesuits, the first Catholic missionaries in Japan. Francis is the first pope of the Jesuit order.

“There have been tensions between the Japanese bishops and the Vatican over what it means to be Catholic and Asian, dating back to Benedict and John Paul II,” Ngo said, referring to Francis’ predecessors.

Yet despite disagreements over doctrine, culture and the translation of Catholic rites into Japanese, Japan, due to its secularism, could become one of the last havens of religious pluralism in Asia. The rise of fundamentalism in Indonesia, India, Vietnam and the Middle East poses a threat to Christians and other religious minorities. Religious friction in Indonesia, home to the world’s largest Muslim population, has grown steadily over the past two decades.

“After Suharto’s fall, everyone had freedom of expression, including Islamists,” said Andreas Harsono, Jakarta-based researcher for Human Rights Watch.

The megaphone held by fundamentalists prompted even the moderate government of President Joko Widodo to adopt repressive policies such as the Blasphemy Law, which punishes offenses against the six officially recognized religions in Indonesia. Protestantism and Roman Catholicism are two of the six. But the most publicized case in recent memory is that of the former governor of Jakarta, Basuki Tjahaja Purnama, a Christian of Chinese descent known by the nickname “Ahok”, who was jailed for insulting the Koran.

Religious harmony regulations that give a region’s majority religion a veto over places of worship have also led to the closure of more than 2,000 Indonesian churches, according to Human Rights Watch.

Meanwhile, in China, a decades-long standoff between the Vatican and Beijing eased last year when Pope Francis recognized seven government-appointed bishops. But Hong Kong Bishop Emeritus Cardinal Joseph Zen has criticized the deal as a betrayal of Chinese Catholics who practice their faith out of fear of the Communist regime. A Mass in Mandarin at Ueno Catholic Church in Tokyo on November 24, hosted by the Chinese Catholic Center.

Most of the Chinese parishioners at the Ueno Catholic Church in Tokyo belonged to the “underground” church in China, according to Father Robert Deiters, an American Jesuit priest who has been in Japan for 67 years and heads the Chinese Catholic Center. “Underground does not mean that they are hidden or secret, but they are run by bishops who have not been approved by the Chinese government,” he explained.

After the Communist Revolution, the Vatican was cut off from the Chinese Catholic community, due to a disagreement over the right to appoint and ordain bishops. The Chinese government oversaw a state-approved church and selected its own bishops, while a parallel underground church remained loyal to the Vatican. Despite the recent thaw, the Vatican still does not have an ambassador in Beijing.

At Ueno Church, Chinese families gather for Sunday Mass in Mandarin. Parents bring children of all ages, which is unthinkable in China, where some local regulations prohibit anyone under the age of 18 from attending church or receiving religious education.

Although Japan offers such freedoms, some believe society could be even more welcoming.

Many Japanese Catholics keep their beliefs private. “Some of the students I speak with are hiding their religion because their friends have a funny reaction and make a big deal out of it,” said Ngo from Sophia University. “They don’t want to be turned into some sort of other.” 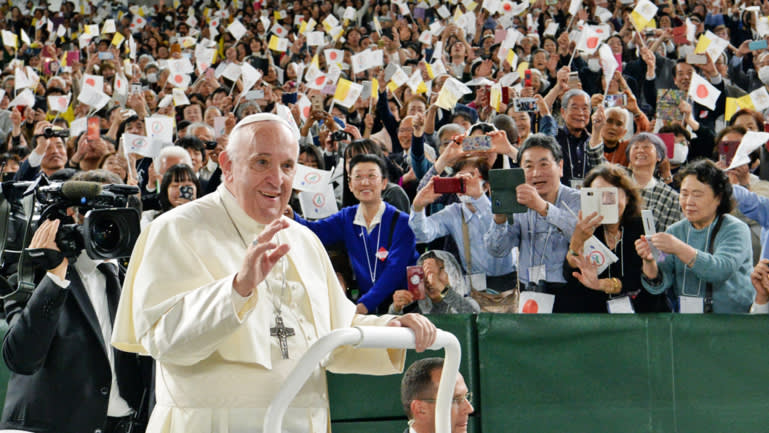 Pope Francis greets supporters during a mass at the Tokyo Dome on November 25. (Photo by Kai Fujii)

Churches in Japan have benefited from the growing number of immigrants, from Filipinos and Westerners in Tokyo to South Americans working in auto factories in Nagoya. “A lot of parish life, especially in Tokyo, has been invigorated by immigrants,” Ngo said.

But Masayuki Katsumoto, an engineer who attends the Hongo Catholic Church, said Japanese Catholics are often reluctant to mingle with immigrants in their churches due to the language barrier. “It’s a problem. We have to learn to live with foreigners,” said Katsumoto, who volunteers as a Japanese teacher at the church’s refugee services office to help newcomers integrate into the country. the society.

A choir of languages ​​greeted Pope Francis on Monday as he entered the Tokyo Dome in his personalized popemobile.

Outside the stadium, people lined up in case tickets became available at the last minute. As she waited, Miya Guerrero, a longtime Catholic from the Philippines, smiled when a group of Japanese schoolchildren were introduced.

“I’d rather let the young people have the tickets,” she said, “so that their faith will be strengthened.”