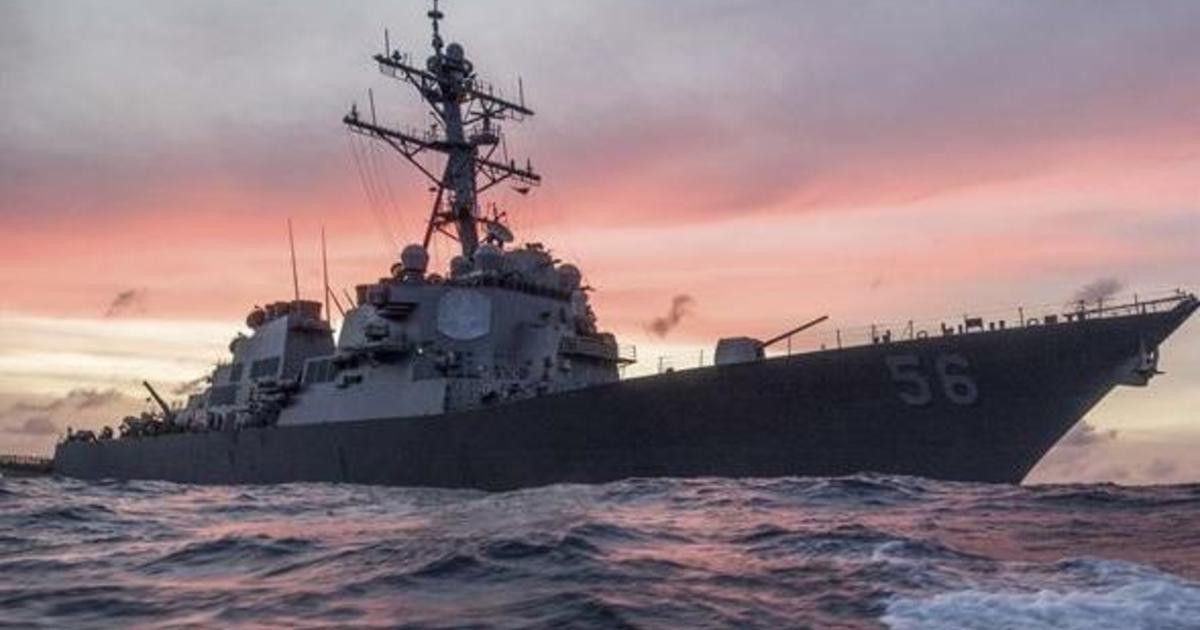 Officers have been asked to keep a warship named for the late Senator John McCain out of sight of President Trump during his Memorial Day weekend visit to Japan, CBS News has confirmed.

CBS News Senior National Security Correspondent David Martin reports that a U.S. Indo-Pacific Command official wrote an email to Navy and Air Force officials before the arrival of Mr. Trump. It included instructions for the appropriate landing zones for helicopters and preparations for the USS Wasp, the ship the President was to speak on.

The official then issued a third instruction: “The USS John McCain must be out of sight,” according to the email, which was first obtained by the Wall Street Journal. The Washington Post and The Associated Press have also confirmed its existence.

Three US officials spoke to the AP on Wednesday on condition of anonymity because they were not authorized to discuss private correspondence via email.

Josh Dawsey of the Washington Post tweeted Wednesday night that “Administrative officials confirm WSJ story. A request was made to ensure that the McCain vessel was not visible. POTUS. “

The Journal reported that when a Navy commander expressed surprise at the training, the head of the US Indo-Pacific Command replied, “First, I heard about it as well. ” The official said he would speak to the White House military office to get more information on the directive, the Journal said.

In response to the story, Mr. Trump – who publicly argued with McCain for years and at one point made fun of his military service – tweeted that he “was not informed of anything this is having to do with the Navy ship USS John S. McCain during my recent visit to Japan. “

The president does not say in particular that he was not informed of the ship before his visit. A message requesting clarification was left with White House press secretary Sarah Sanders on Wednesday evening.

The president again denied the information on Thursday, firmly telling White House reporters that he was “not involved” in the decision-making process.

In Jakarta, Indonesia on Thursday morning, Acting US Secretary of Defense Patrick Shanahan told reporters: “When I read about it this morning, it was the first time I heard of it. .

He then told reporters traveling with him to a security conference in Singapore that he would ask his chief of staff to review the reports.

He said he would never dishonor the memory of a great American like McCain or disrespect the young men and women of the ship’s crew.

Asked about members of the service getting involved in political situations, Shanahan said the military “must do its job” and stay out of politics.

The Journal reported that a tarpaulin was placed over the name of the USS John S. McCain prior to Mr. Trump’s arrival, according to photos it examined, and that the Sailors were ordered to remove any cover from the vessel bearing his name.

Navy Chief Information Officer Rear Admiral Charlie Brown tweeted Wednesday evening that “The name of the USS John S. McCain was not withheld during POTUS ‘visit to Yokosuka on the day of the Remembrance. The Navy is proud of this ship, its crew, its namesake and its heritage. “

A spokesperson for the Pacific Fleet confirmed to CBS News that “the photo of the tarp is from Friday and it was taken down on Saturday. All ships remained in normal configuration during the president’s visit.”

Martin says the McCain’s captain was on the ship on Saturday and the tarp was missing. “The admiral in command of the 7th Fleet, Admiral Bill Sawyer, is credited with ordering nothing to be covered up,” adds Martin.

Two US officials told the PA that all ships in the port were lined up for Mr Trump’s visit and were visible from the USS Wasp. Officials, however, said most of their names could probably not be seen since they were side by side, but the USS John S. McCain’s name could be seen from the pier.

When asked if the tarp was intended to block Mr Trump’s view of the ship, officials said the tarp was placed on the ship for maintenance and removed for the visit.

Two U.S. officials said a paint barge was in front of the USS John S. McCain on Saturday morning when 7th Fleet officials walked the pier to see what everything looked like for the tour. The barge was then ordered to be moved and was gone by the time Mr. Trump arrived, officials said.

The Journal reported, based on people familiar with the matter, that the sailors of the USS John S. McCain, who usually wear hats with the ship’s name on them, were given a day off when Mr. Trump.

McCain’s sailors were given a day off, Martin reported. He said there was “no reason not to believe the sailors who say they were wearing McCain caps and were turned away, but it is possible that the reason they were turned back was that baseball caps were not part of the dress code for the event. “

Two US officials told the AP the ship’s sailors were not told to stay away, but many were gone for the long weekend. Officials also said that about 800 Sailors from more than 20 Navy ships and commands were aboard the USS Wasp during the president’s visit, and all wore the same Navy hat without a logo, rather than wear individual ship or command hats.

Mr. Trump and McCain had a frosty relationship and it continued, from Mr. Trump, even after McCain died in August 2018 from brain cancer.

In 2015, McCain, a Republican senator from Arizona, put himself under the skin of then candidate Mr. Trump by claiming that he had “turned on the fools” at a rally in Phoenix. Mr. Trump, also a Republican, later told a crowd in Iowa that McCain was just a war hero “because he was captured. I love people who weren’t captured. “.

After Mr. Trump took office, McCain established himself as a leading critic, opposing Mr. Trump’s immigration restriction order, warning him against comforts with Moscow and lecturing him on the illegality of torture. The senator infuriated the president with his negative vote that thwarted the president’s efforts to repeal President Barack Obama’s healthcare law.

Mr Trump was unwelcome at McCain’s funeral and raised the American flag from the White House to the staff shortly after McCain’s death, despite the American flag code stating he should stay mid-body for another day. The flag returned at half mast later in the day.

McCain’s daughter Meghan tweeted on Wednesday that Mr. Trump would “always be deeply threatened by the greatness of my father’s incredible life”.

She added, “There is a lot of criticism about the way I talk about my dad, but nine months after he passed Mr. Trump won’t let him RIP so I have to stand up for him.

“It makes my grief unbearable.”

She then addressed the controversy on ABC’s “The View” on Thursday, saying “the president’s actions have consequences.”

“When you repeatedly attack my father and war heroes, it creates a culture in the military where people are clearly afraid to show my father’s name,” McCain said. “That’s what started it all over again… if you’re afraid to have a hat or to show the name of the warship that bears the name of my grandfather, who was an officer in the Navy.”

The USS John S. McCain is named after the late Senator, his father and his grandfather, both admirals of the Navy.

The destroyer was involved in a 2017 collision which claimed the lives of 10 crew members and, according to the Reuters news service, is currently being repaired.

For the latest news and analysis, download the free CBS News app