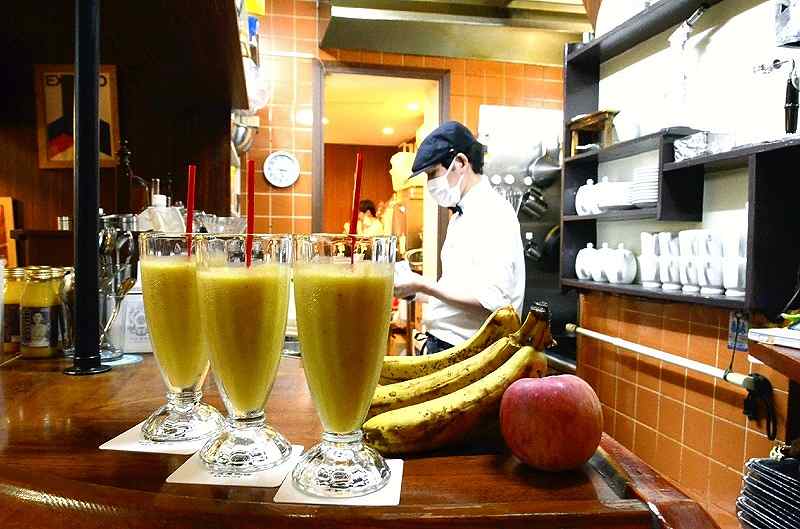 OSAKA — A staple on the cafe menu in the Kansai region is “mixed juice,” a drink made from various types of fruit. The drink originated in downtown Shinsekai in southern Osaka.

Sennariya Coffee, a long-established cafe where the juice was born, closed down once, but a fan of the store took it over and revived it. The shop now attracts people hungry for the nostalgic taste of juice.

The Naniwa neighborhood cafe is located on Shinsekai’s bustling Janjan Yokocho Alley, which is filled with kushikatsu (fried meat and vegetable skewers) restaurants, go parlors, and other shops.

Inside, the retro, brown-themed cafe is packed with couples and families chatting over a blend of juices.

Banana, apple, yellow peach and mikan orange are mixed with milk and ice cubes in a blender. The texture is so thick that a straw placed in the juice can stay straight and look like a smoothie.

“The apple and banana flavors are rich, but also refreshing. It’s a perfect drink for hot summers,” said Emi Minami, 37, who lives near the cafe.

Sennariya was originally a fruit store, founded in 1948 by Ichiro Tsunekawa. At the time, shortly after the end of World War II, fruit was a luxury item and the juice mix was designed so that unsold fruit would not go to waste. The juice quickly became popular for its savory taste of ripe fruit, and the shop turned into a cafe in 1960.

The mix juice has since spread to other cafes, and each shop has concocted its own recipe.

Marufuku Cafe, which was founded in Osaka in 1934 and now has stores in the Kansai and Tokyo metropolitan areas, has offered blended fruit juices on its menu since around 1950. Its juice is milk and sugar free, leaving no than the taste of fruit. Umeda Mix Juice near the ticket office at Hankyu Osaka-umeda Station sells komatsuna (spinach with Japanese mustard) juice as well as its signature mikan orange and yellow peach drink.

Osaka-based companies rely on the appeal of blend juice products. Torikizoku Holdings Co., a large tavern chain, has had mixed fruit juice on its menu since 2005.

“Orders [of mix juice] in Kansai are double those in the Kanto and Tokai regions, and it sells more than oolong tea,” a spokesperson for the chain said.

Sennariya closed in the summer of 2016. At that time, the alley was partly occupied by an increasing number of visitors to Japan. But the store’s third-generation owner, Toyoko Tsunekawa, 79, had fallen ill.

Katsuhito Shiratsuki, 55, the current owner of Sennariya, stopped by the cafe, learned of the store’s closure, and decided to take it over himself. Shiratsuki grew up in the nearby neighborhood of Abeno, and the taste of Sennariya’s juice mix brings back memories of coming to the cafe with his parents. He worked for a TV production company and had no experience running a restaurant, but recalls: “It was so sad to lose that shop. So, I thought I would take the plunge to take it back.

He contacted Tsunekawa’s eldest son and decided to rent the store to reopen it. Sennariya’s blend juice recipe listed the ingredients, but did not specify the exact amounts. Shiratsuki visited over 20 other cafes to compare drinks, while adjusting flavors based on the Sennariya recipe.

The store reopened the following year, in May 2017, with support from Osaka-based restaurant production company LIFEstyle Inc.

Shiratsuki got a thumbs up for the taste of his juice from an elderly customer who said, “That’s it!” Sennariya again became crowded with regulars and tourists.

Like other restaurants, the cafe was forced to close temporarily during the coronavirus pandemic. Even so, Sennariya has branched out to open in Kawasaki in August 2020 and in Osaka’s Umeda district in May this year. “I will make blended juice a world-famous Osaka specialty like okonomiyaki or takoyaki and pass it on to the next generation,” Shiratsuki said.