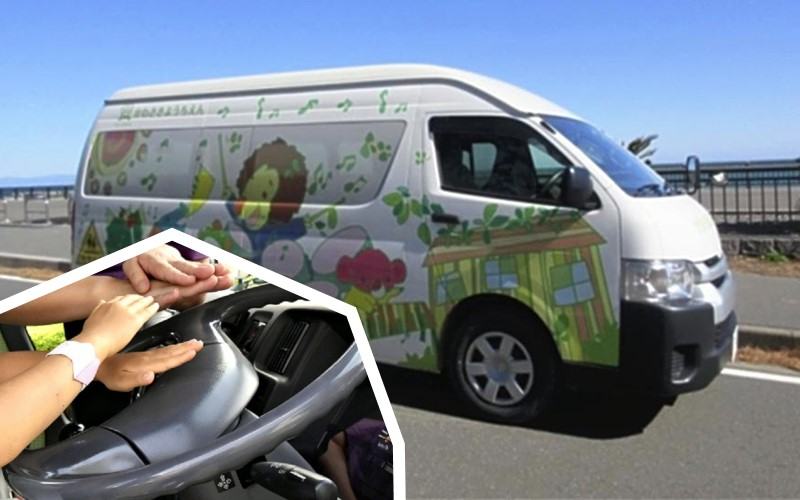 A growing number of municipalities are putting in place measures to protect the lives of young children, following the recent death of a 3-year-old girl from heatstroke who was left alone on a school bus from a daycare centre.

The central government has decided to conduct emergency inspections of kindergartens and other facilities across the country that use school buses, and plans to compile relevant emergency countermeasures in October. However, many municipalities carry out exercises and field surveys on their own without waiting for the central government.

On Monday, the kindergarten affiliated with Musashino Junior College in Sayama, Saitama Prefecture, held a drill to deal with a possible situation where children are left on a school bus. Aimed at enabling children to seek help on their own in an emergency, the kindergarten had 42 3-year-olds honking their horns in the driver’s seat.

Some children were afraid of noise, but kindergarten staff and officers from Sayama Police Station kindly taught them to honk their horns.

“You can push the horn with your butt or a water bottle,” the children were told.

China Kawamoto, 3, died on September 5 after being left alone in a locked school bus for about five hours at Kawasaki Yochien, a certified daycare center that functions as both a preschool and kindergarten, in Makinohara , Shizuoka Prefecture.

The bus was driven that day by Tatsuyoshi Masuda, 73, the chairman of the board of directors of the establishment, instead of the usual driver, who was off work. The school said the incident was caused by four errors: (1) not confirming that all the children got off the bus; (2) not having multiple staff inspect the interior afterwards; (3) failing to provide final confirmation of children’s attendance; and (4) failing to confirm with parents or guardians when a child who was supposed to be present was not present.

Shizuoka Prefectural Police are investigating the case on suspicion of professional negligence resulting in death. A similar incident occurred in July 2021, when a 5-year-old boy died after being left on a kindergarten bus in Nakama, Fukuoka Prefecture.

The Fukushima prefectural government began sending survey sheets to all prefectural daycares on September 7, to check whether they confirm things like the number of children getting on and off school buses and whether staff members share information.

Similar surveys were conducted in Miyagi and Gunma prefectures.

The prefectures of Iwate, Ibaraki, Chiba, Hiroshima and Miyazaki also issued a notice asking relevant institutions to confirm thoroughly that no children are left behind on school buses.

No national guidelines for school buses

According to the Cabinet Office and other sources, there are no safety guidelines compiled by the central government regarding school bus services used by preschools and kindergartens, as these services fall outside the scope of the category of child care or educational activities.

Artwork and other things are painted on the rear seat windows of the Kawasaki Yochien school bus where the girl was left alone, making it difficult to see. However, the Ministry of Lands, Infrastructure, Transport and Tourism said there were no restrictions regarding the painting school. buses, with the exception of the windscreen and the windows of the driver’s and front passenger’s seats.

In South Korea, the issue of children being left behind on school buses has been recognized as a social issue and in 2019 it became mandatory for school bus operators to install devices to check whether all passengers have disembarked . If a driver or other relevant person fails to press an unlock button installed at the rear of a bus and perform certain other activities within three minutes after the engine is turned off, an alarm near the driver’s seat driver is triggered and the emergency flashing lights are activated.

Since 2021, school bus operators are required to check the transparency of school bus windows, to ensure that people outside the vehicle can see inside.

Sanyo Trading Co., a Tokyo-based trading house specializing in automotive interior materials, is encouraging child care centers and other facilities to introduce detection sensors in Japan that are used for school buses in the United States of America. by the end of fiscal year 2023. The sensors are manufactured by IEE SA, of Luxembourg, and are installed on the ceiling of a school bus. They send an alert when they detect passengers.

“We must not just condemn those responsible. We should take a close look at why such a terrible incident happened,” said Mafumi Usui, a professor of social psychology at Niigata Seiryo University.